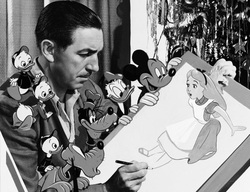 When thinking of fairy tales today, most minds wander into the wonderful world of sparkly dresses, handsome princes, talking animals, and evil witches that Disney has so thoroughly constructed. Beginning in 1923, Walt Disney’s journey was filled with ups and downs, but ultimately ended with the creations of one of the most powerful brand names in the world.

Between the creation of Walt Disney Brothers Studio in 1923, and 1928, Walt Disney released several drawn cartoons, culminating in the creation of the iconic Mickey cartoon, the first of which was released on November 16, 1928. Between 1932 and 1936 Disney released several short cartoon flicks, featuring characters such as Mickey Mouse and Donald Duck. He wouldn't release his first feature length film until the next year, and with the release of that film, came the change to fairy tales as they were previously known.

The first fairy tale that Disney made his own was Snow White and the Seven Dwarves, which was released in 1937. There were several changes made to this film from the original tale, such as: the dwarves playing a bigger role and given names; the step mother only tried (and succeeded) to kill Snow White once with an apple instead of the three times she tried (corset laces, poisoned comb, and poisoned apple) in the Grimm's version; the prince met Snow White for the first time in the castle rather than first seeing her in the coffin; and lastly, Snow White woke up by a kiss rather than the apple being bumped from her throat.

After the success of Snow White, Disney hit a rough patch in the forties due to the United States entrance in the second world war, and other troubles with his animators. The story that really changed the game for Disney, and set them solidly on the path of world domination came in 1950 with the creation of the second big commercial success, Cinderella. Cinderella followed much of the same formula of Snow White, featuring scary step mothers, snappy side kicks, and a good dose of both magic and happily ever afters. This formula seemed to hold the key for success for this company, and Disney took that key and ran with it. Since the release of Cinderella, Disney has used their magic on several other tales such as: Beauty and the Beast, Rapunzel, The Princess and the Frog, The Snow Queen, The Little Mermaid, and Aladdin.
Powered by