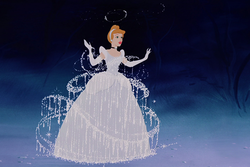 One of the very oldest of all fairy tales is Cinderella. Versions of the lovely maiden who eventually marries royalty have been floating around in every culture for centuries. Often considered the very oldest version of the story is Rhodopis, which is the tale of a greek girl who is sold into slavery and eventually (by virtue of her slipper being brought to the Pharaoh and him decreeing that the woman who fits in the slipper shall be his wife) marries Pharaoh Ahmose II of Egypt. This story was first recorded by Greek historian Strabo in 1st century B.C.

Flash forward a couple thousand years, and Cinderella is still just as popular in today's society. Two of the most popular versions are the classic Grimm's version, and perhaps the most widely recognized is the Disney version. Below is a list of the differences between the two tales.